It's all about helping employees connect better and making life easier as one continues to work from home.

The classical definition of a 'workplace' has changed in the last three months.

We no longer go to offices, or factories. Instead, our bedrooms, or living rooms, have become the new workplaces. And our equipment of choice? A computer, and a smartphone. That's fortunately, or unfortunately, the new normal.

These days, we don't call people, we Zoom call them. We don't chat, but send WhatsApp group reminders. We don't send files, but share them on common access dropboxes.

Now, Facebook has a new ad promoting its 'Workplace' offering. The one-minute-20-second-long ad features a new office and all that it has to offer (kids, pets, sofas and couches on which people can sit and work, books acting as laptop stands, etc.). And while all of this is/looks different, the ad shows us how 'Workplace' is keeping everyone connected, and ensuring everyone and everything is on the same page.

In an October 2016 blog, Facebook said, "At Facebook, we’ve had an internal version of our app to help run our company for many years. We’ve seen that just as Facebook keeps you connected to friends and family, it can do the same with coworkers. We started testing a version of Facebook for the workplace with a few other organisations over a year ago."

"Now, more than 1,000 organisations around the world use 'Workplace' (formerly known as 'Facebook at Work'). People have created nearly 100,000 groups, and the top five countries using 'Workplace' are India, the US, Norway, the UK and France. We’re excited by the progress we’ve made, and the level of adoption and engagement we’re seeing."

"So, today we’re announcing that 'Workplace' will now be available to any company, or organisation, that wants to use it."

In a 2019 blog post, Facebook said, "... We’re proud to announce that over three million people are paying to use 'Workplace' to build those communities."

And, in the same year, ISG, a global technology and research firm, in a report recognised 'Workplace' as a leading enterprise solution in a changing collaboration landscape.

Some of the features the 'Workplace' platform offers are:

Integrations with existing tools - from Office 365 and G Suite to Dropbox, Salesforce and SharePoint

Its competitors include Slack, Microsoft Teams, and even Zoom. The latter has, in fact, become quite popular ever since the lockdown was enforced throughout the country. 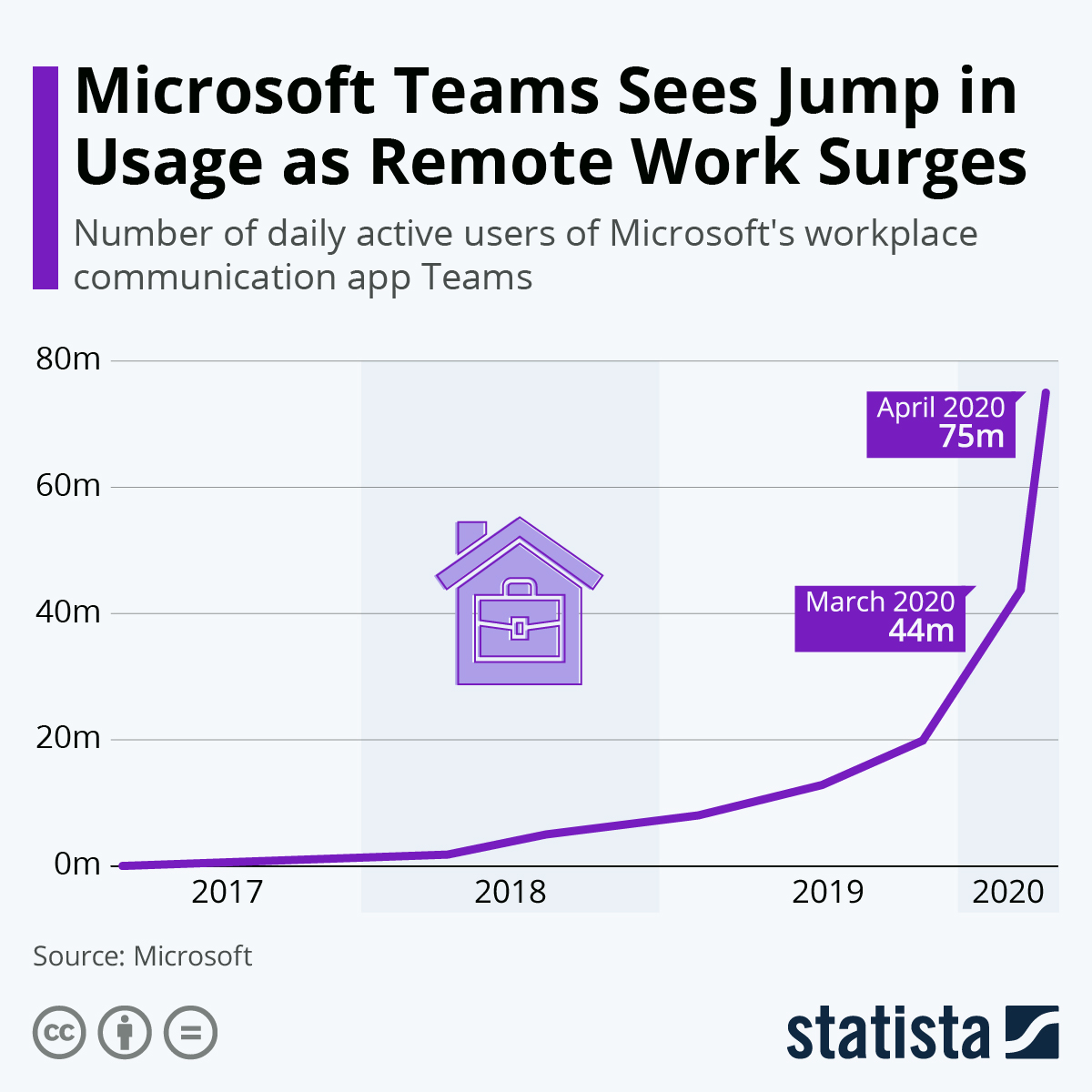 You will find more infographics at Statista

During an earnings call with analysts on April 29, 2020, Microsoft CEO Satya Nadella said that the company's workplace chat app 'Teams' now has 75 million daily users, and is adding 31 million every month.

Allen Shim, chief financial officer at Slack, said, at the fourth quarter and fiscal year 2020 results, "We finished the year with 110,000 paid customers, and 893 customers spending more than $100,000 annually with Slack.” (Unlike 'Workplace', Slack doesn't charge per member.) A 2019 report in The Verge revealed that Slack had 12 million daily active users.

Sensor Tower, a leading mobile apps insights company said that Zoom was the most downloaded non-game app in 2020 across the App store and Google Play.

And now, joining the list of such platforms is one of India’s cellular network Airtel. Yesterday (May 18), Airtel launched ‘Work@Home’ - India’s First Enterprise-Grade Work From Home Solution for Businesses.

As remote working becomes the norm, one thing is certain, the battle between such platforms will heat up in future.